You can scroll the shelf using ← and → keys

I would be happy to return this memento to the winner, who must have gone to some effort to win it:

A friend of mine brought in several books the other day and we made a trade. He got a book on creativity, and I got a couple for the shop and one for my Everest shelf in my personal library.

I think he suspected that’s where this one would end up.

You see, Peter always comes into the shop when I’m unpacking an interesting lot; he must smell them as he walks past the door. He comes straight to my desk, picks up the choicest item (to my mind), and says, “How much is this one, Elizabeth?” and I respond, “I’m sorry Peter. <add put-off excuse here>” Once he even got tetchy with me.  I do feel really badly to be denying him a great read. But my selfish streak is more powerful. It’s the collector in me. And I do love my polar exploration and mountaineering books. I really am sorry, Peter.

I like to think this book was his way of saying, “I understand.” LOL Maybe he was saying thank you because I finally let go and sold him one from my Antarctic collection.

I have a particular fascination for Everest, so Dead Lucky got a bump up my reading list – right to the top. And it didn’t disappoint. 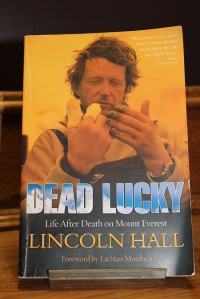 Lincoln Hall was part of a pioneering Australian Everest expedition in 1984. The expedition had a bittersweet ending for him: he was the only one of who didn’t summit. He got on with his life, of course, climbing other great mountains, getting married and starting a family, becoming an author and the editor of an Outdoor Australia magazine, and so on. Always tugging at his subconscious, though, was the summit of the world’s highest peak. Deep down, Hall still craved the view from the Top of the World. To be able to say, “Yes, I climbed Everest,” and then, “Yes, I did make the summit!”

His opportunity came with a 2006 expedition, as a cameraman filming the ascent of a teen who hoped to become the youngest ever to summit. He answered the call, even though he really didn’t feel that he was as prepared as he should be.

There are several things I really like about this book. Reading it, I felt more like a friend talking to Lincoln about the whole experience of climbing. He shares his concerns about his readiness, his rationale, his family, his hallucinations on the mountain, his insecurity over the effect of his words and actions on others while he suffered the effects of cerebral edema, how his beliefs came into play and affected his survival…. He is frank. Readers become a part of the experience, perhaps feeling a little off balance at times but never to the point that we are overwhelmed. The harsh reality of climbing in the Death Zone is there. Fortunately, we have a good guide we can trust, very much like Lincoln Hall himself did.

There are betrayals both real and perceived in this story, too, some of which are resolved, others that Hall understands he will never understand. He accepts that and walks away from them. That latter response was one that took a strength of character not surprising, perhaps, in one who has survived something no other climber ever has. Any one of the four conditions he suffered from should have killed him. In fact, he was believed to be, and abandoned as, dead above 28,000 feet. Lincoln Hall’s response to betrayal, more than anything else in the book, has given me a lesson I will be thinking about for some time, all the more so because it wasn’t intended as a lesson, just as a statement of how he coped with what happened to him.

Finally, it’s about drama in real life. People who have so much going for them throwing their lives at a 29,000 foot mountain of rock, ice, snow, thin air, and incredible danger. I still don’t understand that. I probably never will. And what I don’t understand often fascinates me. I never could turn down a good mystery.

There is something fascinating about crazy people who do crazy, dangerous things. Remember Don Starkell and the book about his and his sons’ incredible journey by canoe from Winnipeg to the Amazon River? The book was called Paddle to the Amazon. It was Charlie Wilkins’ first national best-seller. It was an adventure most people would be far happier reading about than participating in, and I still have a few people in every year asking for that book.

But I think Paddle to the Amazon had a different effect on its co-author. I think that engaging so intimately in the Starkells’ wild, often death-defying odyssey triggered something that had been lying latent in Charles Wilkins. Something that came to full flower in his latest book, Little Ship of Fools.  Ironically, Wilkins has come full circle. His most recent adventure also brought him to a boat that sits low on the water and is propelled by wood (well, graphite) and muscle. But to paddle across the Atlantic in a canoe would be insane! So, Charlie and his co-crew set off  from Morocco in a modified rowing shell, a catamaran-style albatross of a boat called Big Blue. Their goal: to cross the Atlantic in a record-breaking time of 31 days.

Because of his age (even at 63 he isn’t the oldest crew member), the curiosity that surrounds his departure is rather morbid. Few of his acquaintance expect to see him again. As the journey progresses, he sometimes wonders if the naysayers may be spot-on in their predictions. For the voyage begins to take on a Rime of the Ancient Mariner type of quality. Or should I say, lack of quality. There are no really high points of adventure, here. This story is one of a grueling day after day after day struggle, two hours of rowing against the formidable ocean swell (or worse) followed by two hours of rest (sleep if one can), repeat. Repeat….

Wilkins manages to survive, spoiling the film-makers hopes of a sensational documentary (well, perhaps not really). I’m going to see that film on Saturday night when Charlie addresses the crowd at the Word on the Water Saturday Night Page-Turner Gala. I’m hoping that it will address one weakness I found with Little Ship… the photograph section. To be fair, I’m not sure what all one can photograph at sea on a very stressful and exhausting voyage such as Big Blue’s was, and had I been there, I might also have refused to let him publish my photo. I’d almost rather his publisher had decided to omit putting any photos in, though, and just left me to the whims of my imagination.

Back to the voyage… Thirty-one days stretched into many more. The voyage took over 50 days in all. The rowers had a foreboding sense that it would do just that fairly early on, but past the point of no return. And they lived with the knowledge that they were not prepared for that extended stay at sea. As the voyage progressed, Charlie became more and more aware of other deficiencies in the plans both of the expedition’s organisers and in his own preparations for the trip.

Little Ship is a great read: another adventure best experienced from one’s armchair, I think, although Wilkins feels he gained more than the physical and mental distress of it all. His book gives what seems a pretty fair assessment of what life was like on Big Blue. The reader is aware (if not, Charles outright states) that this version has been censored. But one still picks up on the undercurrents, the stresses, and the consequences of the lack of strong leadership and living in unusually close quarters with a small and diverse group of suffering athletes.